Here’s a Hallowe’en tale to make your blood run cold and your hair stand on end. And it’s coming to you via a chunk of sandstone in my back garden. Get ready to hear about a graveyard, a Black Mausoleum, a vile atrocity from Scotland’s history, an evil poltergeist and some spooky coincidences.

And get ready to hear about Edinburgh’s worst-ever villain, Bluidy Mackenzie.

It all started a few days ago when my wife and I were watching the BBC TV celebrity genealogy show Who Do You Think You Are? Afterwards, Frances was complaining that if she was ever invited to have her family history investigated by the show, the episode would never be completed because she doesn’t have any interesting forebears.

I begged to differ, reminding her that in side branches of her family tree can be found such characters as the poet William Drummond of Hawthornden (1585-1649); the notorious outlaw and folk hero Rob Roy McGregor (1671-1734); and General Sir Ralph Abercromby (1734-1801), who led the British forces to victory over Napoleon’s army at the Battle of Alexandria in 1801, where he was fatally wounded.

The very next day (Spooky Coincidence #1) I was prompted to ask Frances if she was also related on the maternal side to Sir George Mackenzie of Rosehaugh (1636-1691). It’s a possibility – indeed a probability – that there’s a family relationship, because her mother was a member of the extensively-interrelated Mackenzie clan from the Western Highlands of Scotland.

Not that Frances would wish to be related to Sir George. Of all the bad ‘uns who stalk the pages of Scottish history, you’ll find it hard to identify anyone more vile than him. But at least if you could claim him as an ancestor you would get your programme on the telly.

Sir George Mackenzie had been brought to my attention by a Very Strange Occurrence.

First some background: early on in my blogging career, I wrote a piece entitled Walter Mawer’s Stone (read it here), in which I described a carved stone panel installed in the year 1600 on the wall of a house in Strichen’s Close in the Old Town of Edinburgh on the occasion of the occupant Walter Mawer’s marriage to Margaret Waus.

The house was demolished in the 1960s, and almost no trace was left – except for a fragment of the stone panel which was somehow preserved and subsequently found its way into my suburban garden.

The publication of my blog posting in January 2017 was met with resounding silence from its readership, and I had scarcely thought about it again until the day following my reminder to Frances about her illustrious forebears.

Then, spookily, I received this email message through the ether from a Mysterious Stranger:

“I know it’s been a while since you posted your really fascinating blog on Walter Mawer’s stone, but did you ever find either the rest of it or a picture of it in place before demolition?”

The answer to this out-of-the-blue enquiry was no. I haven’t discovered the remaining piece or pieces of the stone. And when I wrote the blog, I looked quite hard online but was unable to find a picture of the house.

Before writing back in the negative to my Mystery Interlocutor, I decided to check with Google just on the off-chance that an image of Walter Mawer’s House in Strichen’s Close had appeared on the internet since I last searched almost five years ago.

And there it was! In the Print Room at the National Gallery of Scotland, a 19th century pen and sepia wash drawing by J Kennedy. It is captioned as the House of Sir George Mackenzie in Strichen’s Close, but it’s definitely the same house as Walter Mawer’s house because you can clearly see the stone panel in position over the low door at the front. As confirmation, the drawing includes an enlarged detail of the stone, the top left-hand section of which corresponds closely with my fragment (see below).

On checking, I find that Sir George Mackenzie lived in the house a few decades after Walter Mawer. So there’s a second Spooky Coincidence for you: the stone in my garden was on the wall of a house in which a possible distant relative of my wife lived some three and a half centuries ago.

OK, so perhaps it’s not all that spooky. I concede that up to now this hasn’t been the kind of story that would send my grandchildren screaming under the duvet if I told it to them at bedtime on Hallowe’en.

Ah, but I haven’t got to the scary bit yet. Stand by for the tale of Sir George “Bluidy” Mackenzie, and his Dreadful Deeds and his Mausoleum and his Ghost. Turn down the lights. Ignite the candle inside the pumpkin. Brace yourselves.

Sir George Mackenzie was a hard, hard man, richly deserving of his bloody soubriquet. A staunch royalist lawyer and supporter of King Charles II, he was appointed Lord Advocate of Scotland in 1677, a position in which he zealously oversaw the prosecution of criminals and the persecution of witches.  But his lasting reputation for villainy was established in the aftermath of the Covenanters’ rebellion of 1679, known as “The Killing Time”.

The Covenanters were members of a presbyterian religious movement which denied the right of the sovereign to rule over the church. Their rebellion was brutally suppressed by government forces at the Battle of Bothwell Bridge and many defeated rebels were captured and brought to Edinburgh for trial and punishment.

Prison provision then (as now) was inadequate for the numbers of offenders sentenced to be banged up by the Scottish legal system. So Sir George found a clever solution for more than 1,000 Covenanter prisoners. He had them locked up in a high-walled field adjacent to Greyfriars kirkyard on the edge of the Edinburgh’s Old Town, and he left them there on scant rations and with no shelter for the next four months.  Many were beaten and murdered, or died from starvation, exposure or illness. Most of the survivors were either beheaded or sentenced to transportation – but then the ship carrying them to America sank with the loss of all on board.

Little wonder that Sir George became known to history as Bluidy Mackenzie. In 1680 he was excommunicated from the church and delivered over to Satan “for his constant pleading against and prosecuting to death the people of God”. Hardly anyone else has had a good word to say about him from that day to this.

The story doesn’t end there. Before his death, Sir George engaged William Smith, a prominent Edinburgh architect, to design a tomb for him. The tomb is known as The Black Mausoleum. And in which graveyard did Bluidy Mackenzie wish to be laid to rest? Why of course, he was interred in Greyfriars Kirkyard, within a few metres of the place where he had occasioned the deaths of hundreds of defenceless Covenanters. What a monster!

He was interred, yes, but laid to rest, no.

The burial place of Bluidy Mackenzie became by popular repute the least restful and most unquiet grave in Scotland. From the bowels of the Mausoleum, the poltergeist emerges nightly to roam Greyfriars Kirkyard, where it has become almost as popular a tourist attraction as the spirit of Greyfriars Bobby, the rather vapid SkyeTerrier who stayed faithfully and boringly beside his master’s grave for some fourteen years. By contrast, Bluidy Mackenzie is hyperactive, constantly out and about, patrolling the kirkyard, scaring the living daylights out of tourists and children, and earning untold profits for the organisers of Olde Edinburgh Ghost Tours.

You need to understand that we’re not just talking about any old namby-pamby spectre. The ghost of Bluidy Mackenzie is the best documented supernatural case in history & responsible for hundreds of attacks on visitors. Moreover, the poltergeist haunts what is acknowledged to be easily the creepiest graveyard in the world. This is serious stuff.

But what, you might wonder, has it got to do with the Random Treasure blogger? Let us return to Spooky Coincidences. I have related the bizarre circumstances in which I discovered a new putative relative for Frances on the day after she was looking for interesting ancestors; and I’ve given an account of the strange discovery that a Stone in my garden formed part of the wall of Sir George Mackenzie’s house while he was living there in the 1670s. And now for four more startling revelations which (I feel sure) will cause a chill to run through the veins of my readers.

My case rests. This extraordinary series of parallels, these repeated instances where your blogger’s life touches tangentially upon that of a troubled spirit from Scotland’s violent past – these cannot be mere coincidences. Darker forces are at work.  Surely you will agree from all the evidence herein presented, that beyond all doubt, on this All Hallows Eve, there is an unexplained and supernatural bond between me and the demonic figure of Bluidy Mackenzie.

If stones could speak, Walter Mawer’s Stone would doubtless have much to tell about Bluidy Mackenzie’s period of residence in the house in Strichen’s Close during the Killing Time of the late 1670s. The location was perfect for Mackenzie’s line of work. The Close was just two minutes’ walk from the Parliament House (where he was a Member), the Faculty of Advocates (where he founded the Library), and the High Court (where he prosecuted witches and persecuted Covenanters). And just four or five minutes to the south lay Greyfriars Kirkyard, the scene of his abominable inhumanities, where his restless shade still stalks the graves of his victims.

From its position above a door facing onto the close, the Stone witnessed Mackenzie’s comings and goings and overheard many a sinister, conspiratorial conversation. The Stone knows all. 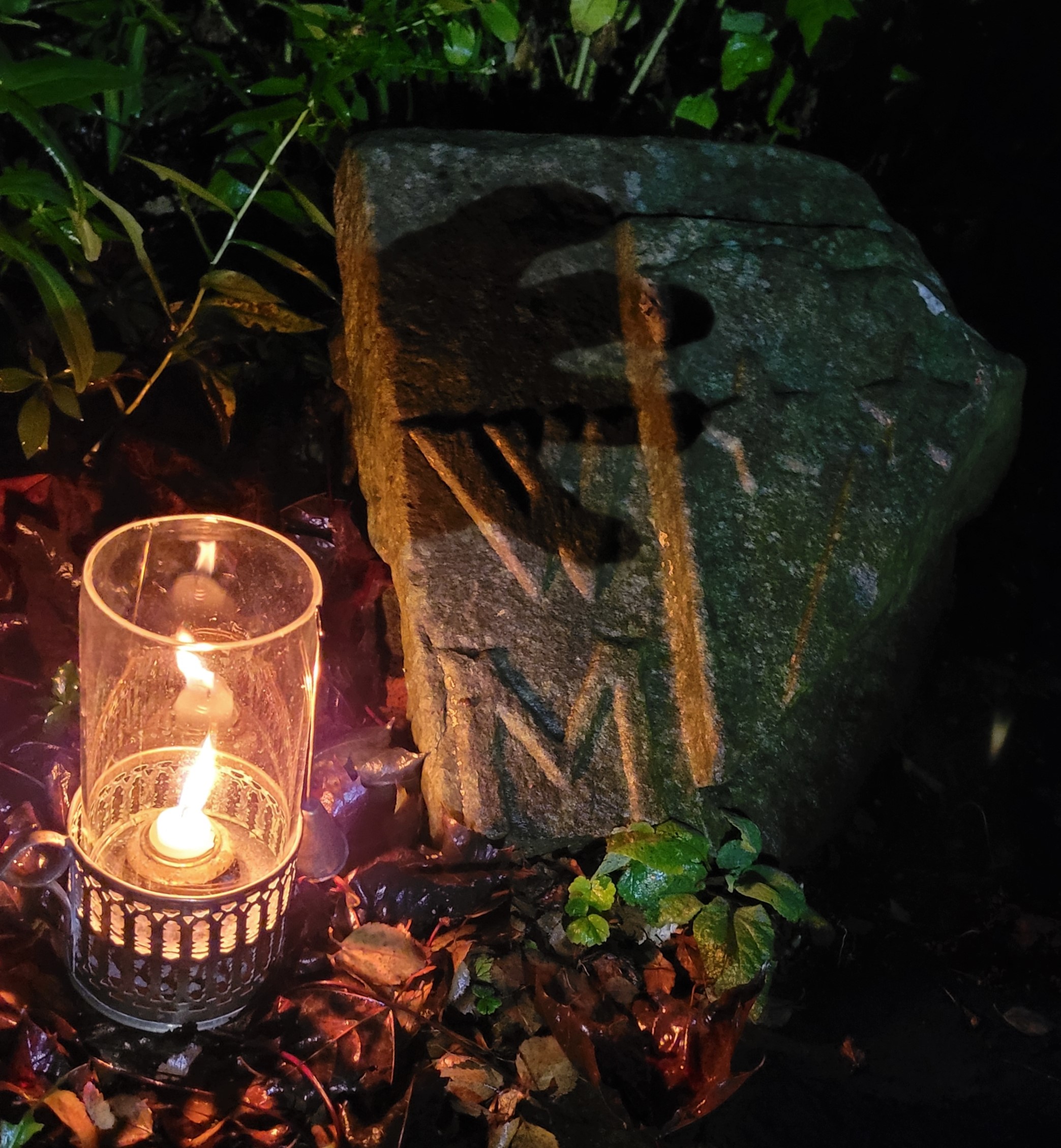 Dear Readers, I am persuaded that perhaps stones can indeed speak. I am convinced that my strange affinity with Bluidy Mackenzie qualifies me as the most appropriate person to hear what lurid and ghastly tales Walter Mawer’s Stone has to tell. This Hallowe’en evening, around midnight, I plan to venture into my back garden, regardless of the risk. I intend to crouch beside the Stone, and listen. I care not what horrors might await me.