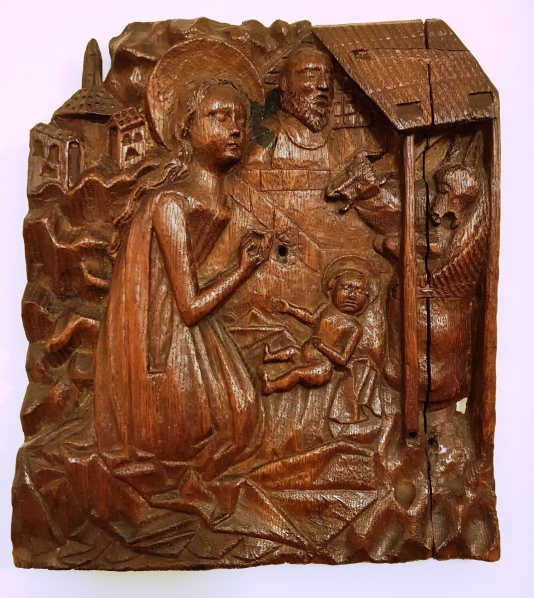 Since I am writing this blog piece in the week before Christmas, I’ve picked a seasonal object from my small collection of early woodcarvings. It’s a panel carved in relief with a nativity scene.

The central figure is the Virgin Mary, with halo, kneeling serenely beside the baby Jesus (also with halo), who, frankly, doesn’t look all that cheerful, lying uncomfortably on some drapery representing the manger. Joseph looks on, apparently from behind a screen or partition, and the Ox and the Ass observe the proceedings from their stall. Above to the right is the roof of the stable, and in the background to the left behind the Virgin’s shoulder there is a distant view of the Little Town of Bethlehem with hills beyond. It’s a simple tableau, quite crudely carved, using conventional iconography.

This charming little carving lives on the wall in my kitchen. We’re a non-religious household but at this time of year we decorate it with a few coloured glass balls and sometimes lift one or other of our small grandchildren up to have a close look. It’s always the Ass that gets the thumbs-up.

There is probably nothing irreverent or inappropriate in hanging a panel such as this in a kitchen. It is likely to be an object made for contemplation in the home rather than in a formal place of worship, and its naïve style and conventional composition suggest that it was probably made by a local artisan for a modest domestic setting.

The panel is small – just 27.6 cms tall, 23.7 cms wide, with a maximum thickness of 2.5 cms. It is made from two pieces of oak, one wide and one narrow, and you can see the join running vertically past the tip of the Ass’s nose. A couple of horizontal braces have been inserted to hold the two pieces together. As far as I can tell it’s a complete and original object without significant losses, and has never been part of a larger construction such as a piece of furniture or an altar retable. The ragged, rocky left edge and cut-out church spire appear to be purposeful elements of the composition. I don’t think it has ever been polychromed or gilded either. 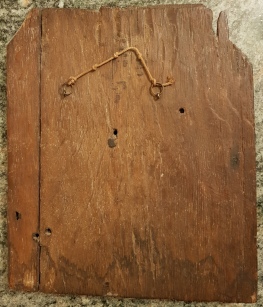 On the back are two small rings and a string for hanging – these look old but by no means original. I’m not sure how it was originally hung, but there are a few other holes which might indicate earlier fixings.

I bought the panel at my regular auction house about three years ago for around £60. This kind of object doesn’t come up often in small auction rooms, but you do see them now and again. Demand for items with religious subjects tends to be low, and generalist auctioneers might not know or care much about them – which means that there are occasional miscatalogued and overlooked bargains to be found which (if you can bear to part with them) can be placed with specialist dealers and auctioneers and re-sold to high-end international collectors and museums.

I know this because of my experience a few years ago with my statue of Saint John bought from the same local auction. After extensive research I discovered that it was a lost masterpiece carved by the sculptor Claus de Werve in the Duke of Burgundy’s workshops around 1430. The subsequent sale in Paris set a world record for the sculptor and made headlines in the trade press. The story is told in full in my book Random Treasure.

Returning to the little panel with the nativity scene, I realise that I haven’t told you where it’s from or how old it is, or how much it’s worth. I can’t be 100% certain on any of these issues, but from comparison with other similar pieces, I think it is Flemish and probably dates from the second half of the 16th century or early 17th century. As for what it’s worth, I don’t care much because I won’t be selling it, but I’d imagine that a specialist auctioneer might give it an estimate in the range £600 – £800. Not a fortune for a delightful and decorative object that’s at least four hundred years old. As for provenance – sorry, but I have no idea how it turned up alongside a load of very undistinguished furniture and bric-a-brac in a back-street saleroom in Edinburgh.  But I’m glad it did. 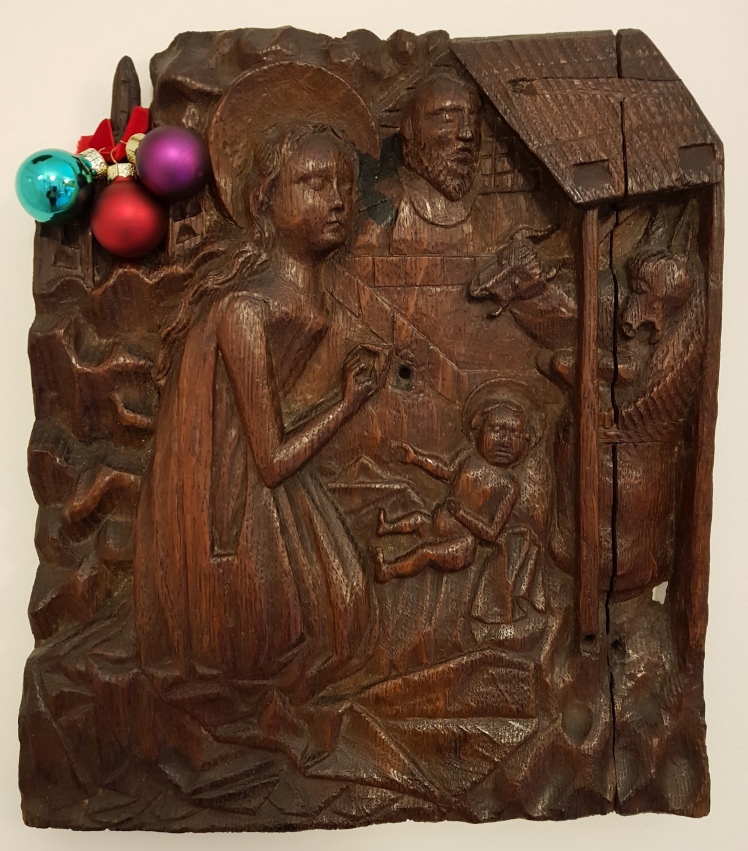