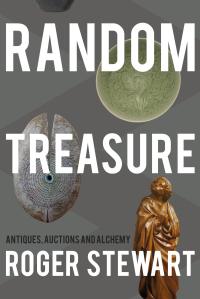 A few years ago at a local auction I bought a wooden sculpture on a whim.  It didn’t cost much.  It turned out to be a statue of Saint John the Evangelist, a mediaeval masterpiece which had been lost for more than two centuries after being looted from a church during the French Revolution.  I re-sold it in Paris for a very large amount of money.  If you want the whole story, you’ll be able to read it soon in my forthcoming book Random Treasure – Antiques, Auctions and Alchemy.

Not unnaturally, my experience with the Saint John statue sensitised me to the topic of religious statuary, a subject in which I previously had no expertise and less interest.  If, before, while browsing in an auction room or antique shop, I happened to meet a statue of a saint or more generally any other artefact with a church connection, I would entirely ignore it and move on rapidly to something more attractive.  Nowadays I stop, look carefully, apply what small knowledge I have acquired, and then, if the object seems at all interesting or at all affordable, I have a punt.  Just in case.

So it was with Saint Benedict.  I had formed the habit of attending the occasional sales organised by a small firm of auctioneers based in Bo’ness, West Lothian, about fifteen miles from home.  It’s OK if I’m a bit rude about them because they have closed down now.  Their auctions were a huge jumble of stuff of all kinds, from lawnmowers to oil paintings and everything conceivable in between.  Once there was a fire engine.  Unusually, they correctly identified it as such.  More frequently, objects were miscatalogued, often bizarrely.  This type of auction provides perfect potential for the excavation of Random Treasure.

On this particular occasion there were twenty or thirty lots which had obviously come from a church or chapel.  Some furnishings (a font, a lectern), some pictures, some sculptures, all fairly modern and none of it of great quality.  Except for one painted wooden statue about 80 cms tall including his carved pedestal.  He’s a thin bearded bloke dressed in gold-edged black robes. He’s in poor condition with his saintly attributes missing from his hands, a

nd the polychrome paint on his face badly worn and cracked.  But on closer inspection I can see that he’s well-carved and he’s old.  The catalogue says that he’s a statue of Saint Benedict.
I bought him for about £300, bidding, I believe, against a reserve price and not against another active bidder.  On the way out of the saleroom I came by the information that he and the other religious objects had been consigned by the monks of the Cistercian Trappist monastery at Nunraw, East Lothian.  They were downsizing the abbey and selling off their guest house, and these artefacts were now surplus to the monks’ requirements.  Interesting provenance, then.

I got Saint Benedict home and set out to prove that he was just as rare, important and valuable as my magnificent Saint John. But he wasn’t in the now-familiar fifteenth century Burgundian style of Saint John, so I had to look elsewhere for ideas.

Where do you start if you wish to identify an object that you know little or nothing about?  On Google Images, naturally enough.   It was difficult, time-consuming, eye-straining work.  But after looking at hundreds or thousands of images of carved wooden saints, and after corresponding by email with specialist dealers and museum curators, I finally arrived at some fairly firm conclusions:

That’s what I know.  So, is my Saint Benedict statue an example of Random Treasure?  Well, he’s extremely interesting, he’s three hundred years old, he’s strongly characteristic of Northern Spanish baroque sculpture, he’s a good quality object, he’s rare, and he’s got provenance.  Lots of ticks in lots of boxes.  But is he valuable?  Sadly, I think he’s probably not worth very much more than the price I paid for him. 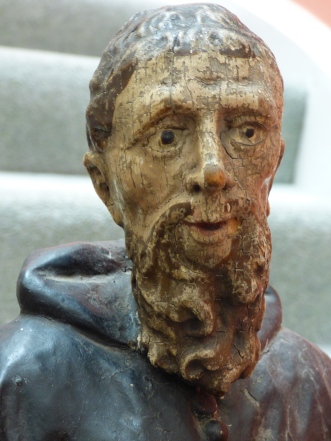 The statue is currently sitting beside the hearth in my study collecting dust, along with many other miscellaneous objects.  I like it but don’t really know what to do with it.  If I decide to sell, there will be difficulties.  It’s of no interest in Scotland, but it might be possible to attract a few European or American collectors or museums.  However, there’s no auctioneer here competent to catalogue it accurately and expose it to a suitable range of international buyers.  Ebay is unlikely to produce decent bids, and in any case shipping overseas would be expensive and problematic.  So he’ll be with me for the time being.  I don’t mind.