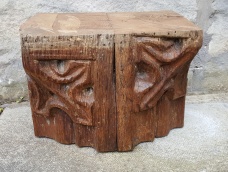 My last posting was about an oak low stool which I believe to be made from two fragments of mediaeval carved column capitals. In the piece, I beefed about my inability to find online images of 15th century foliage to compare with the leaves carved on my stool. I fell back instead on some Victorian illustrations of Gothic ornamental detail, culled from architectural history and design books by A W N Pugin, Owen Jones and J H Parker.

Here’s a coincidence.  Every month I receive an email news bulletin from The Engine Shed, Historic Environment Scotland’s building conservation centre in Stirling. A few days ago I clicked on the latest issue and there at the top of the page was a banner photograph of a series of Gothic carved leaves forming the capital of a stone column – exactly the type of image that I had been seeking just a week or so previously (reproduced above with kind permission of HES).

I got quite excited. Of course I well realise that some readers of my blog might think it distinctly strange for anyone to get excited at seeing a photo of a fifteenth century carved leaf (or at least for anyone to admit it), but that’s what happened. Getting this type of buzz from an antique object is a phenomenon that I try to explain in some detail in Chapter 4 of my book Random Treasure, so I won’t dwell on it here. You’ll just need to accept that I got excited. So, excitedly, I emailed HES to ask about the location of the column in the image – and received a very prompt and helpful reply to the effect that it’s in the East Range of Linlithgow Palace.

Linlithgow Palace is about 15 miles from my home in Edinburgh, a pleasant 40 minutes’ drive when the roads aren’t too congested, or an unpleasant hour or more at peak times. Last Saturday afternoon, the route being relatively quiet (thanks mainly to both of the main Edinburgh football clubs playing fixtures away from home), Frances and I popped along to see if we could find the column and take a few snapshots.

If you haven’t been to Linlithgow Palace, I strongly recommend a visit.  It’s a magnificent pile, one of the main residences of the Scottish monarchs for almost two hundred years until the Union of Crowns in 1603, when King James VI and I moved the royal court to London. The Palace is a huge roofless ruin now, but remains exceptionally impressive in its size, grandeur and location overlooking Linlithgow Loch and northwards to the Lomond Hills. Mary Queen of Scots was born there in 1542.

The Palace is square in shape, arranged in four ranges of rooms around an inner courtyard which contains the wonderful Renaissance-style fountain built for King James V.  The East Range is the earliest surviving part of the building, and was begun in 1425 after the previous castle on the site was destroyed by fire.

The carved column that we were seeking was not difficult to find. In fact there are four of them, supports for an unbelievably gigantic fireplace opening at the royal end the Great Hall. The hall is a huge lofty space which, when complete with its hammer-beam roof, walls hung with tapestries, candle-lighting and expensively dressed members of the court, must have been a fabulous spectacle, unbearably hot at the fireplace end where the royalty sat, and absolutely perishing down among the hangers-on and commoners below the salt. 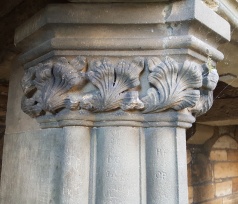 But on approaching closely to the columns, I perceive a problem. The carved foliage on the capitals isn’t quite right. It’s too sharply carved. It isn’t as weathered as the other sandstone architectural features around it. It hasn’t been exposed to the Scottish weather for a few hundred years. It must be a relatively recent replacement for worn-away original carving. Oh no! I came to see an authentic 1425 carved leaf and here I am back in Gothic-revival territory, unable to escape from the long shadow of Augustus Welby Northmore Pugin. It isn’t that I distrust the authenticity of Gothic reproductions by Pugin and his followers – but their lovely designs just aren’t what I’m looking for today.

Fortunately the fireplaces at Linlithgow Palace are big enough to walk into without having to do much crouching, and since they have been abandoned and open to the elements for three or four hundred years, there’s no danger of scorching. Getting up close, I find that tucked in at the inner angles of the capitals are some small portions of the original carving which have had slight protection from the elements. They are worn and cobwebby but recognisable. Just what I came for! Undaunted by the curious stares of other (perhaps less obsessive) visitors, I climb in and, head up chimney, start taking some snapshots with my phone. Then, slightly later, I discover another original carved leaf which has become detached and is on display in a glass case in a corridor on the South Range. I take a photo of it too.

Here are some of my Linlithgow snaps for you to compare with a leaf from my stool (on the left) and a leaf from the re-carved capitals  (on the right).  The unexpected discovery of these Gothic motifs not far from home makes me more confident than ever that my oak stool is the real 15th century McCoy.