Have you ever heard of a studio potter called Carolina M Valvona? No, I hadn’t heard of her either, until a large quantity of her pottery turned up in my local saleroom. There must have been more than a hundred pieces, and they were sold over the course of at least three weekly sales. The larger pots were sold singly, and the smaller items were grouped together with up to ten pieces in each lot.

The average price per lot sold was around £30-£40. For all I know, the auctioneer might still have more of Carolina’s pottery for sale. But then the saleroom – in common with everything else – was locked down while the coronavirus pandemic runs its course.

What can I tell you about Carolina M Valvona? Not much. I think she lived and potted in West Lothian. I think she was a member of the well-known Scots-Italian family which founded Valvona & Crolla, the long-established and celebrated delicatessen in Elm Row, part of Edinburgh’s Leith Walk. I think (although I haven’t verified this) that she died and that her pots were being sold off as part of the clearance of her effects.

And what can I tell you about her pottery? She potted mainly in stoneware. She produced thrown and hand-built vessels and figurative pieces in a wide variety of shapes, sizes and styles. She used a varied palette of glazes. She derived her inspiration from the work of a number of better-known potters, artists and sculptors. At least some of her output must have been made for sale because a few of the pots up for auction still had original price labels stuck to them.

But the overall impression that I gained from viewing Carolina’s pots was that she was a competent hobby potter and not a professional. Of course I might be quite wrong about this: a possible alternative explanation is that the only pots left in her pottery at her death were trial pieces, seconds and rejects. Some of her sold pieces out there might be masterpieces of the studio potter’s craft (or art). But somehow I don’t think so.

That’s OK with me. I don’t have a problem with collecting work by amateur potters, and that’s why, when I saw the lots in the auctioneer’s online catalogue, I rushed along to the viewing. I was hoping to add the name of Carolina M Valvona to my List.

Not certain that I have mentioned my List in previous posts on this blog.  It’s a List of Lost Potters, some professional, some amateur, each in his or her own way a maker of outstandingly good pottery, but all almost entirely forgotten and unknown even to the nerdiest of studio pottery collectors. There are currently eight potters on the List,  and they are the subjects of a  writing project which I have been keeping separate from Random Treasure in the hope of sometime turning it into a book.

I’ve been thinking about my Lost Potters Project for a few years now. The purpose is to consider the lives and appraise the output of the potters on the List with a view to establishing for each of them a measure of recognition in the studio pottery hall of fame (such as it is). Not a high-up place among the stars, but at least a foothold in the firmament somewhere slightly above the horizon.

Here are the eight names currently on my list: Derek Beaver, John Davey, Iain Denniss, Peter Fishley-Holland, Alistair MacDuff, Honor Reid, Alex Sharp, Edi Thompson. If you’re a regular reader of this blog, you’ll have read a piece featuring one of them, Alexander Sharp (see https://random-treasure.com/2018/06/14/expert-connoisseur/). As for the other names – well, you’ve almost certainly never heard of any of them.

I have amassed a large amount of information about some of my potters, all of whom floruit in the second half of the twentieth century, and were either Scottish or had strong Scottish connections. I’ve made contact with family and friends and received kind offers of information and co-operation for some of them, but I know less about others, although for most I have leads which will enable me to make enquiries.

And yet, regretfully, after much thought, I don’t now think that I can get enough material or interest out of the project for a stand-alone book. Instead, it’s likely that I’ll either subsume the project within this Random Treasure blog, or I’ll set up a separate Lost Potters blog featuring a series of short biographies and assessments, which will be published as I complete them. Haven’t quite decided yet what the format is going to be. Watch this space.

However, as you can tell, there’s still a great deal of research and writing to be done. And between now and the time the project is complete, I’ll also be open to adding new names to my List, particularly if they are women. 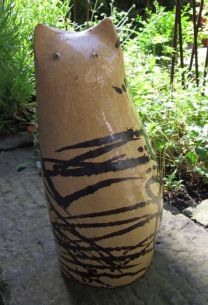 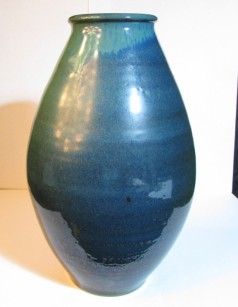 No, it’s because most of the women candidates for admission to my List already have someone to stand up for them. Joan Faithfull, Katie Horsman, Hella Young and others – all were very fine potters who could have been on my list, but all of them already have their advocates among the many geeky pottery collectors of my acquaintance.

But there’s no-one else but me standing up for the eight Lost Potters on my List.

Now you know why I was so keen to look at a new hoard of pots coming onto the market made by a Scottish studio potter whose name I didn’t know. Would I be able to make an addition to my List to help to redress the gender imbalance?

Nope. Sorry, but interesting as Carolina M Valvona might be in all sorts of ways, I’m afraid that her pots (or at least the hundred or so that came up for sale from her house clearance) simply don’t measure up to the entirely subjective quality threshold that I have set for admission to the List. Some nice glazes, some interesting shapes. But here’s the main problem: heft.

You can find out most of what you want to know about a pot from picking it up and holding it in your hand. It’s about the weight, the balance, the feel, the thickness of clay in proportion to size, the uniformity and harmony of the structure.  Once you have handled enough pots, you can instantly form an opinion – with which most other collectors and dealers and potters will agree – about whether the potter is a good potter (be it professional or amateur) or a hobbyist with rather more enthusiasm than talent or taste.

And that, I’m afraid, was my opinion of Carolina M Valvona’s pots. A keen amateur, maker of cheerful, pleasant pots, perhaps to sell at garden fetes and craft sales, but from the instant I held one of her pots, I knew that she was not a candidate for my Lost Potters List. Pity, that. I could have done with an extra woman.

Yet, despite forming an opinion that her pots were not suitable to join either my collection or my List, I still went ahead and put in a bid for one of the lots, and was absolutely delighted to win it.  So I’m now the owner of nine small pieces by Carolina M Valvona. They aren’t offensive in any way, indeed some are quite attractive, but none of none of them give me special pleasure or satisfaction, so they are not keepers. Worse, I can’t give them away to a charity shop, because they are all closed during the Lockdown and the Lord only knows when they will re-open.

What a strange way to behave. Why would I buy objects that I don’t want?

Did I buy these nine pots because I’m nothing but a weak-willed hoarder, and if I find pots by any new potter I just have to own them regardless of whether I like them or not? Or did I buy them because I thought I could make a handsome profit from re-selling them? No, neither of the above. 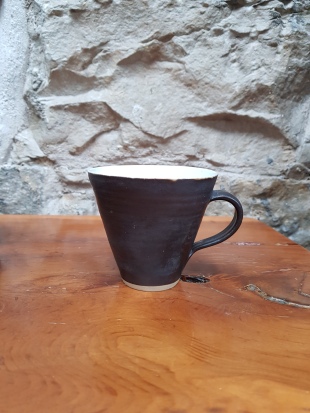 There is just one simple reason why I bought an auction lot containing nine of Carolina’s pots: it’s because there weren’t only nine pots in the lot. There were ten. At the Friday viewing and then at the Saturday auction, I’m pleased to say that no-one but me noticed that the tenth pot – a teacup – was made by a different potter altogether. The instant I picked it up I felt the difference – once again, it’s all in the heft. Everything that was not quite harmonious about Carolina’s attractive, colourful little pots was absolutely right about this plain, austere, perfect cup with no saucer. I turned it over, and instead of finding Carolina’s CMV initials incised within a diamond shape on the base, I discovered a familiar stylised monogram: LR.

At the viewing I furtively returned the cup to its position amongst the others, looking around to check that fellow viewers weren’t watching me examine it so closely. I checked all the other lots in the sale and didn’t find any other anomalies. The next day at the sale I bid for the lot and won it for just £34, much the same price level as the other lots of Carolina’s pots. When more appeared in the following week’s auction catalogue I examined them closely, but no more anomalous pots appeared. Nor the next week again. And then the lockdown. 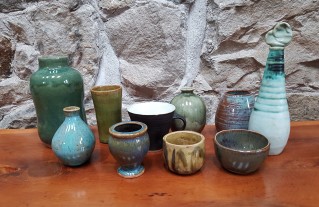 So it’s a mystery. How on earth did an LR pot get in amongst the CMVs? Who knows? But LR was by no means an unknown amateur hobbyist potter who couldn’t gain admittance to my Lost Potters list. In fact she was the absolute antithesis – the least forgotten and most celebrated studio potter of them all: Lucie Rie.

In the second episode of this blog piece which you can find here, I’ll tell you more about the cup, and more about Lucie Rie, and why owning a teacup with no saucer made by Lucie Rie is so wonderful and at the same time so problematic.

4 thoughts on “An Anomalous Pot – Episode 1”