In February 2012 my local Edinburgh auctioneer announced that he was holding an out-of-town Saturday sale in Aboyne, a charming small town in Aberdeenshire.  He hired a hall in the grounds of Aboyne Castle called the Coo Cathedral, a magnificent stone-built Romanesque Revival building originally constructed as a cowshed (Google it if you don’t believe me), and issued a catalogue of some 500 items including some which might have potential to be random treasure.

Needless to say, I’ll go anywhere for an interesting weekend which includes an auction, and this particular opportunity ticked all the boxes.  Frances was willing, so we booked a B&B, and set off on the day before the sale so that we could view at leisure and have a nice meal out in the evening.

According to my records I bought nine lots at the sale and spent a little over £600, including buyer’s premium and VAT.  More than half of this amount went on just two items – Italian maiolica pharmacy bottles, neither described as such in the catalogue.  One turned out on expert inspection to be from the sixteenth century, and I sold it a few months later for a profit sufficient to pay all the costs of our weekend away.  The other was from the seventeenth century, but has some significant damage and I’ve kept it to display alongside several other pieces of damaged Italian maiolica.  No way can I afford (or afford to keep) undamaged pieces.

I can’t remember much about most of the other lots except for a large Linthorpe art pottery jardinière which sold rather well on eBay.

Lot number 156 was a big Chinese blue-and-white deep dish or basin, about 35 cms in diameter, dating from around the middle of the eighteenth century – perhaps made during the reign of the Yongzheng emperor or fairly early in the Qianlong reign.  It’s a lovely thing, hand-decorated in underglaze cobalt blue with peony flowers, a bridge and a tree.  If I were an expert, I’d say that it’s not of the absolute best quality, but it is very attractive.  It cost me just £36 in the Coo Cathedral, but in perfect condition it might fetch perhaps a couple of thousands in an auction of fine Chinese ceramics.

However, it’s not in perfect condition.  Anything but.  At some time a very long time ago, it was broken cleanly into two halves, thus destroying almost all of its value, but possibly (in my view anyway) enhancing its interest. Because after being broken, it was fixed back together using six great big ugly clunking metal staples.

Here is the dish, from the front, back and side.  Pity about the repair. 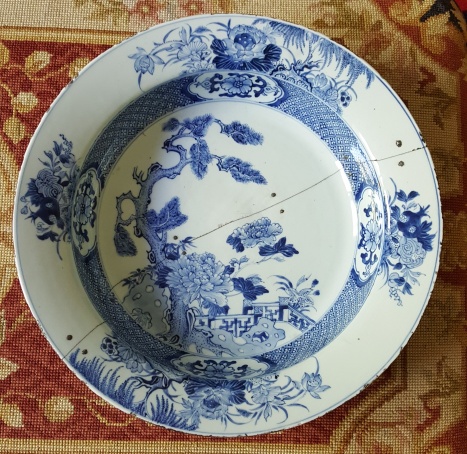 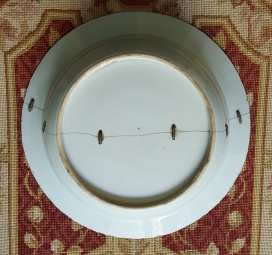 Except that you wouldn’t think it a pity if you are Andrew Baseman, a New York interior designer who has an exceptional collection of – wait for it – repaired pottery.  He writes a fascinating blog called “Past Imperfect” at http://andrewbaseman.com/blog.html, with lots of pictures and information about “inventively repaired” objects reassembled from pieces back in the days before superglue and epoxy resin put a botched repair within the capabilities of all of us. Staple repairs are among his favourites.   He says: “Once regarded merely as damaged goods by antiques dealers and collectors alike, antiques with inventive repairs are justly receiving the respect they deserve”.  I think that’s probably true for some collectors on a tight budget – but there are many more for whom perfect condition in a ceramic object is an absolute prerequisite.

For Mr Baseman and for some others, it’s the nature and techniques of the repairs themselves that hold the principal interest. I can understand that in relation to my Chinese dish. It fascinates me, because I have a silly notion that there is something rather unusual about it. Of course it’s easy to have notions about antique objects, because there’s no way of finding out whether or not they are true.  Perhaps that’s one of the reasons that I like antiques so much: you can imagine almost anything about where they have been and who has owned them and what has happened to them, and (except in rare instances where there is full provenance) no-one can tell you otherwise.

Now, out of all the broken and repaired plates pictured on Andrew Baseman’s blog (of which there are many), I can find only one that, like mine, has a single clean break down the centre.  Interestingly it is also a Chinese plate from the mid-eighteenth century.  You can see it here: http://andrewbaseman.com/blog/?p=9676.  Almost all of the other plates illustrated have multiple fractures or repairs to the rim.

If you think about all the plates you have broken in your life, you will probably conclude that what generally happens is that either a couple of pieces come off the edge through rough handling, or that the item shatters into a million shards.  I have a theory that separation into two clean halves is an uncommon occurrence. In order to effect this type of break, you would probably need to apply a fairly evenly distributed downward pressure across the whole object, rather than inflicting on it a sudden catastrophe such as striking it against a kitchen surface or dropping it onto a solid floor.  I grant that other explanations are available: strong heat might break a plate in two (but would our eighteenth century forebears have put a valuable piece of Chinese porcelain on a hot surface or in the oven?), or the object might have become cracked with a light blow, and the crack might over time open up across the entire diameter (but in this case wouldn’t you expect to see a chip at the place on the rim where the crack originated?).

Not being a materials scientist, and not being about to test to destruction our good Spode dinnerware, I don’t have any proof of my even-force theory of breakage.  So I regret that this explanation of how the dish broke must remain fanciful – not unlike most of my other theories, but not the less strongly-held for that.

I have a parallel theory of how the evenly distributed force might have been exerted.  During the seventeenth and eighteenth centuries it is estimated that the East India Company imported some 30 million pieces of porcelain into Britain from Jingdezhen in Southern China, the main place of manufacture.  The Dutch East India Company imported more.  Cargoes of tens or even hundreds of thousands of items arrived in European ports in Company ships, tightly packed together and often used as ballast material.  Packing and loading and unloading must have been heavy work for dockworkers, and of course the ships travelled over many weeks through thousands of miles of sea in all weather conditions.  The number of breakages must have been phenomenal.

Imagine that many pieces arrived in perfect condition ready for sale or for delivery to whoever had ordered them.  Imagine that many were so badly shattered in transit that they had to be dumped unceremoniously.  And then imagine a few intermediate items, each probably at the bottom of a pile of similar items, whose only fault is a clean break through the middle, caused by the weight of the stack of dishes above it.

Look – this broken one’s a bigger one than average! A clean break with nothing missing. It’s nicely decorated.  It’s too good to throw away. Let’s get it sorted by that tinker who works at the dockside stapling together broken pots as they are unloaded off the ships.  Then it will have a value and we can sell it as a second. And so it’s repaired and sold to the kind of aspirational buyer, here in the middle of the eighteenth century, who desperately wants to own a piece or two of fashionable blue-and-white china, but who can’t afford a perfect specimen.

That’s my story of my repaired dish. It’s all fantastic nonsense. Who could prove a word of it? But what does it matter?  What use is random treasure if you can’t make up romantic stories about it?