I’ve been blogging recently about the contents of an old leather suitcase which belonged to a very wealthy gentleman from the West of Scotland. Fitted out as a top-quality travelling dressing case, it was stored unopened for 80 or 90 years and has only very recently come to light. It contained all kinds of interesting stuff, some of which I have been selling off on behalf of the owner. So far I have raised over £2,700, all of which has been donated to local charities for the homeless.

This piece is about perhaps the least valuable item found in the case. Who is interested in an old torn envelope? Nobody who has an iota of sense. Who would be so foolish as to write a great long wordy blog about it? I would. It’s so long that I’ve had to divide it into two chapters. 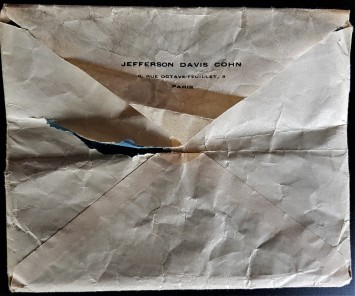 The envelope in question is 15 x 11 cms, made in thin off-white paper with a blue tissue paper lining. It was a good-quality piece of stationery in its day, but now it’s dirty, crumpled and has a big tear. I don’t think it has ever been used for correspondence or sealed, because there’s no address or stamp on the front and the gum on the flap appears intact.

Instead, written in faded ink on the front in cursive script are the words “Italian Change”. When the envelope was found within a cigar box in the suitcase it contained a dozen or so Italian coins of small denominations, the latest of which was dated 1932.

Picture the scene. It’s the early 1930s. A very rich gentleman is travelling through Europe. He leaves Italy and arrives at his next destination, where the local currency is the French franc. So he takes a small handful of leftover Italian lire coins out of his pocket and places them in an envelope which he has taken from a neat pile of stationery on the desk or writing table of the room in which he is staying. He places the envelope in the cigar box which he keeps for just this purpose, and he places the cigar box in his travelling dressing case. Nine decades pass.

Not very interesting so far. It only starts to get interesting when we read what is printed on the flap of the envelope:

Aha! So the envelope didn’t belong to a hotel. Our Scottish gentleman was staying in Paris with another gentleman. Someone with a not-French name who took the trouble to have expensive personalised stationery printed. Let’s see what we can find out about him.

Starting with the address, we note that Rue Octave-Feuillet is in Paris’s 16th arondissement, which, according to Wikipedia:

“with its ornate 19th-century buildings, large avenues, prestigious schools, museums, and various parks … has long been known as one of French high society’s favourite places of residence (comparable to London’s Kensington and Chelsea), to such an extent that the phrase le seizieme has been associated with great wealth in French popular culture.”

Just the sort of district where we would expect our gentleman to keep his friends. Rue Octave Feuillet is just off the Avenue Victor Hugo and a couple of blocks from the Bois de Boulogne. Today, number 9 Rue Octave Feuillet is a Lycée Professionel – an exclusive vocational high school specialising in preparing its pupils for craft careers in the haute couture industries: embroidery, millinery, making of artificial flowers. How very Parisian! How very seizieme! 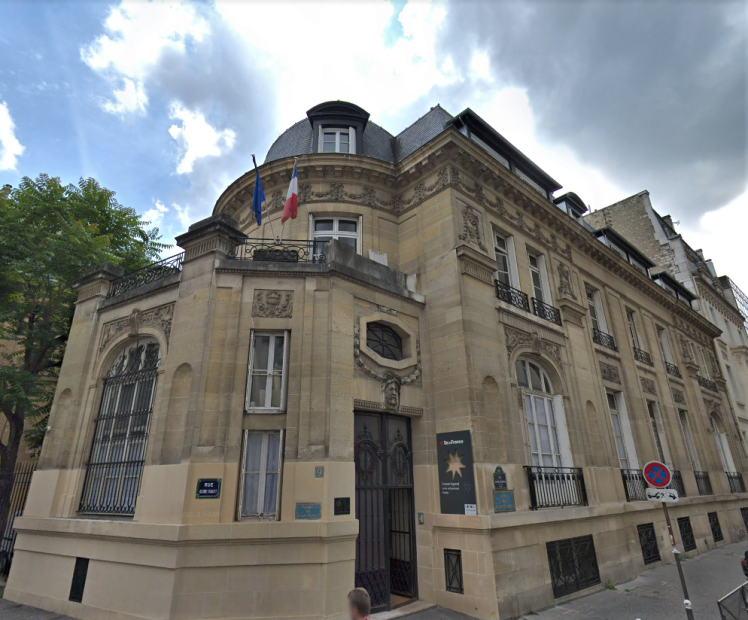 The house was originally built in 1908 as an hotel particulier, a majestic private residence. By the 1930s, when our gentleman came to stay with Mr Cohn – no, sorry, from now on we must call him Captain Cohn – we can assume from the address on the envelope that the house had been divided into superior apartments, and that the Captain lived in Apartment number 9.

We know from my previous blog piece (https://randomtreasureblog.wordpress.com/2019/02/03/a-day-at-the-races/) that the Scottish gentleman was an aficionado of The Turf, a devotee of the ancient and noble sport of horse-racing. Although we don’t have evidence of his visits to racecourses after 1901, we can see that now in the 1930s he maintained his interest – or otherwise, why would he have paid a visit to one of the most celebrated racehorse breeders of his time?

It seems that Jefferson Davis Cohn (1881-1950) was a charismatic and larger-than-life character. Here are some of the snippets about his colourful life, gleaned from various sources:

“when Jefferson Davis came to England after the Civil War in America, he was aided in this country by Cohn’s grandfather. In return Jefferson Davis stood as godfather to the grandchild and the parents gave their son the American statesman’s name”

“one of the most important sires of the 20th Century in the U.S., and … it would be almost impossible to find a thoroughbred alive today that did not carry at least one strain of the great sire through one of his many influential sons or daughters”[1].

See what I mean when I said he was colourful?

But I find, strangely, that even after reading and telling all of these anecdotes about the man, I don’t have any kind of picture of Captain Cohn. Clearly he was a sportsman, a businessman, an adventurer, a risk-taker, a bon viveur and a ladies’ man, but what was he like?

It’s almost impossible to find a photo of him (the one to the left might or might not be him), and I can’t find a single written description of his appearance or demeanour. I can’t find out about his early life, education or upbringing. Was he loud, flashy, and bombastic, or was he smooth, oily and unctuous, or was he witty, charming and sophisticated? I don’t know.

About the only clue I have as to Captain Cohn’s character is a description of him as a “ubiquitous lounge lizard”: a highly uncomplimentary epithet which is quoted widely but which appears to have originated in a book by Colin Simpson published as recently as 1987[2]. Simpson does a comprehensive demolition job on Captain Cohn, describing him as a villain with no meritorious or pleasant or redeeming features whatsoever.

I believe that this is unfair. If Cohn was as much of an outright rogue, swindler and charlatan as Simpson makes out, he surely wouldn’t have advanced so far and so successfully in society as he did. But his social climbing only ever advanced to a certain point, at which his progress invariably stalled. Although he constantly popped up in all sorts of places where the best society gathered, although he had a big house, a big boat, lots of racehorses and enormous investments, there’s always a slight implication that he was considered, like Mr Salteena in Daisy Ashford’s The Young Visiters, as Not Quite a Gentleman.

It’s difficult to be sure whether this was because his behaviour in society was unusually smarmy and loathsome, or for some other reason. Was he, for example, the victim of prejudice because of his perceived lack of good breeding, or might there have been, in society’s attitude towards the Captain, just a whiff of antisemitism?

Regrettably I can’t tell you nearly as much about Jefferson Davis Cohn as I’d like to. I also can’t tell you how he came to be connected with our slightly less rich and distinctly less colourful Scottish gentleman. All we know is that one of Captain Cohn’s envelopes found its way, as a receptacle for Italian small change, into the gentleman’s suitcase.

Patient readers of the Random Treasure blog might by this point be annoyed and frustrated. That’s what I would be if I were reading this piece instead of writing it. This blog purports to be about antiques, auctions and alchemy, and about remarkable objects bought and sold. But all you’ve had so far in this piece is a dirty old envelope and a lounge lizard. Where’s the enjoyment in that?

Well, there’s one story about Captain Cohn that I’ve been saving up, and I’ll tell it in Chapter 2 of this piece. It brings together the lounge lizard, an auction, some fabulous paintings, a young girl who died in 1795 aged just twelve, a secret love affair, the world’s greatest art dealer, a gigantic statue in Hyde Park, London, a cat who died in a drowning incident in 1747 (age unknown), and a couple of badly-chipped blue-and-white plates in my collection.