I have passions for many different types of object. Some of my interests (e.g. drawings and engravings) haven’t developed enough (yet) to become real passions. Others (e.g. coins) engrossed me for years before my interest waned somewhat. Other collecting fads (e.g. 78 rpm shellac records and accompanying gramophones) came and went. Some collections (e.g. studio ceramics) had sudden small beginnings and blossomed out into full-blown obsessions.  Some (e.g. antiquarian books) have continued to interest me at a fairly consistent level for most of my life.  With some classes of object (e.g. woodcarvings), there’s the anticipation of growing a collection in the years ahead.

Then there are certain types of objects which sort of creep up on you; the ones where you don’t even realise that you are preoccupied with them until you take a long hard look at your possessions and – oh my goodness! – there’s a collection. One day several years ago someone pointed out that all the items on a high shelf in our dining room were jugs. So I counted all the jugs in the house and stopped counting when I got to 40. Oops! Where did they all come from?

And so we come to the subject of to-day’s blog post: Turkmen rugs. I love them. I could sit and look at them all day long. Sometimes that’s what I do.

I don’t have many Turkmen rugs: four small ones, one of them a prayer rug; three chuvals or tent bag faces; and one room-size carpet. And another carpet which has Turkmen characteristics but was probably made in Afghanistan, plus three modern Bokhara-type rugs made in Pakistan featuring standardised Turkmen motifs.  Hmmm . . . when you add them all up, that comes to a round dozen.

Eastern rugs and carpets don’t only come from Turkmenistan, of course. Other varieties are available. Historically they have been made by many different peoples in most geographical areas from Romania and Turkey eastwards into China. The modest accumulation that adorns (or clutters) our floors at home includes not only Turkmen rugs and carpets but also examples variously described as Shiraz, Oushak, Hamadan, Baluch, Bokhara and Afghan. Oh, and John Lewis, too.

But the ones that fascinate me are the Turkmen. I wonder why? It’s the rich colours, the soft feel, the busy-ness, the detail, the geometric patterns in regard to which, the more you look at them, the more you notice just a little less symmetry than you were expecting.  It’s the uniqueness of each one, the evidence of expert hand-making, with deliberate small irregularities for added interest, and sometimes even with whimsical touches (like these cute camels).

It’s the romance of nomadic peoples moving from place to place with their grazing animals, setting up portable looms outside their tents and creating unique and gorgeous artworks.

I’m not an expert. Experts know and care about distinguishing the types of fibres used (sheep’s wool, cotton, goat, camel, etc), the technicalities of warp and weft, the type of knot, and whether the dyes used are vegetable in origin or chemically synthesised.  They can look at a rug and tell you in which region (or sometimes village) it was woven, by which tribe or clan or group, and in which decade over the past couple of centuries.  Experts know a lot.  They also disagree a lot.  I’m a member of four very interesting Facebook discussion forums about rugs (see links below) and I tend to find on the rare occasions when I ask for help that advice is willingly given but often leaves me more confused than I was before I made the request.

Take for example my three Turkmen chuvals.  Here they are: 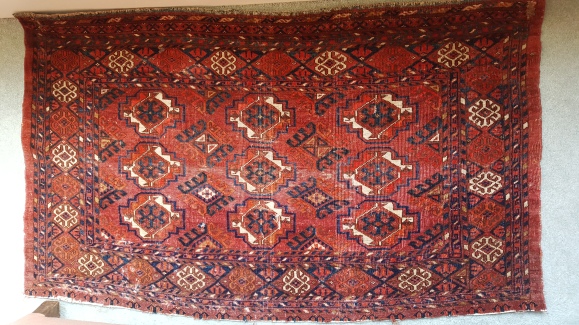 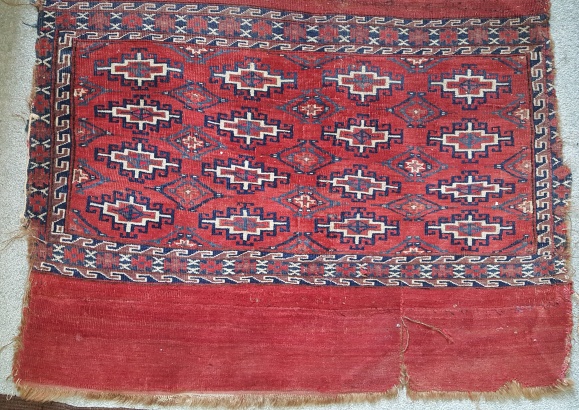 I thought the top one was a Saryk, but one expert thought it was a Yomud and another thought it was an Ersari. I thought the second one was Yomud, and some experts agreed Yomud but another thought Tekke. I thought the third one was an Ersari, but all the experts agreed that it’s Tekke with Salor guls.  But the Salor guls closely match the guls on another rug of mine which everyone agrees is Ersari. I’m not much the wiser and don’t think I’ll ever become truly knowledgeable.

Most of my rugs aren’t worth much either.  There are many collectors but condition is of paramount importance, and the ones that I buy cheaply in local auctions and junk shops are usually quite worn and often damaged, and wouldn’t be of much interest to high-end buyers.  In some ways that’s good because it means I don’t hesitate to lay them on areas of floor subject to high footfall and bright sunlight.  So they aren’t really random treasure, but treasured objects randomly scattered.

The fact that we have no floor space left probably won’t prevent me from occasionally buying another Turkmen rug, although what might stop me is the good sense of my wife Frances. But there’s a lovely one coming up at one of my local auction rooms this Saturday and I might just put in a tiny bid for it . . .

While googling information for this posting I came upon an interesting fact which was hitherto missing from my modest store of general knowledge.  So proud are the Turkmen people of their carpet-weaving prowess that they have incorporated into their national flag the guls or traditional design motifs of their five most prominent rug-making tribes.  The flag is on the left.

From top to bottom, the guls belong to the Tekke, Yomud, Saryk, Choudur and Ersari tribes. The middle gul also represents the Salor tribe, which declined after military defeats in the nineteenth century.

And below for your interest are pictures of guls from my rugs. Just don’t ask me which is which.

Here are links to some fascinating Facebook rug discussion groups: