Readers of Random Treasure have written very complimentary comments about the book. This page features some of them.

“Random Treasure – an excellent book that gives the reader valuable tips that just might help you unearth a hidden gem.”

From Steve Osborn, founder and moderator of Talking Antiques, a Facebook special interest group with more than 77,000 members worldwide:

“The best antique book I have read, every dealer collector should read it”

Review by Deborah Hartman published on Goodreads on 21st June 2018. Read it here.

“This book is a treasure! If you like antiques and hunting for treasure (in thrift shops, charity shops, auctions and the like), this book is for you. Roger Stewart takes you along as he goes in search of “lost and forgotten” antiques. He tells the story behind some of his precious finds – one key example is a wooden carving of a Saint he won at a local auction. He paid a few hundred dollars (well, he’s in Scotland so its pounds) but in the end we learn it’s worth many many times that. I won’t give it away. But you will learn more than just the monetary worth of these special objects. The author describes his explorations as he investigates each object – what it is, when and where it was created and by whom, its historical significance, and what may have happened to it from the time it was made to how it ended up in a the back of a charity shop or auction house.

“Roger Stewart examines many aspects of antiques buying and selling. Is there such a thing as an “Eye” for antiques – or for any fans of the series Lovejoy – a “divvy”? How do you research your finds when you have little idea of what you have found? How do you buy and sell antiques at auctions? What are the ethical and moral dilemmas that may arise in selling antiques?

“This book also looks at the differences between being a collector, dealer, hoarder, connoisseur and dilettante. How do you make sure your hobby collecting antiques doesn’t morph into an overwhelming obsession and compulsion.

“There’s so much more I could say to recommend this book. His writing is charming and funny. I’d say the only thing that would be better than reading Random Treasure would be to walk along with the author as he hunts for treasures in his favorite shops and auction houses. Or to see his latest finds in person and to hear their histories over cups of tea.” 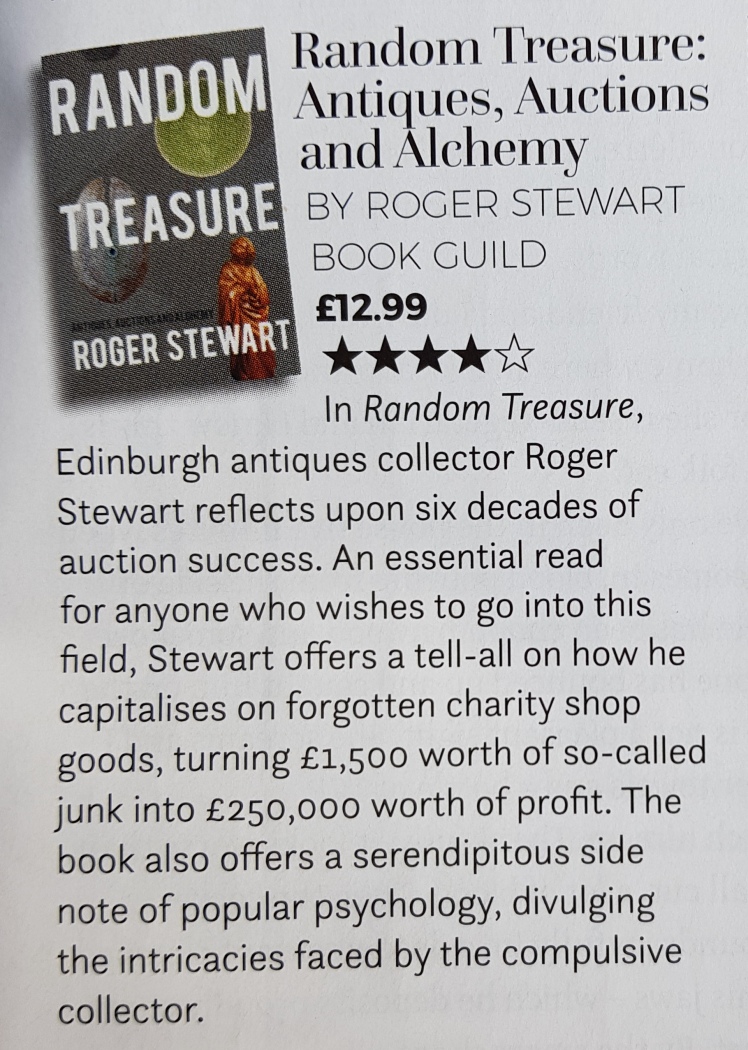 The following review by Wendy Crane appears in the January 2018 issue of Etrog, the journal of Sukkat Shalom, the Edinburgh Liberal Jewish Congregation (or read it here).

Roger Stewart is a member of Sukkat Shalom, a retired businessman who describes himself as ‘a very ordinary and run-of-the-mill sort of amateur enthusiast and collector, with occasional forays into part-time dealing, operating on a modest budget, mostly within one mile from home’. His book is a description of a few of the unconsidered trifles he, like Autolycus, has snapped up, for modest, sometimes extremely modest, sums, and the alchemy by which some of them have been transmuted into gold.

In many ways Roger seems typical of many Sukkat Shalom members: middle income, middle class, intelligent, thoughtful. A major source of his treasures is local charity shops, along with modest local auctions. Many of us, like him, are aficionados of charity shops, and I suspect that after reading this book there will be an additional frisson when we enter Oxfam or whatever.

That is not to say that this book is a description of how to make money from antiques. The author asks himself why he is writing it and describes the pleasure he gains from looking back on his experiences with his finds. Profit is welcome, and has from time to time been spectacular, but his passion is all about the objects, what he is able to find out about them, and the ‘buzz’ he gets in their presence. He concentrates particularly on two of his notable successes, ‘The Jug’ and ‘The Saint’, whose special significance was eventually confirmed by experts. However, he also describes the pleasure he gets from objects which he knows have no special value or about which, in at least one case, he has not succeeded in convincing the experts.

The book is both enjoyable and informative, operating on various levels. The author writes engagingly in a conversational style, a conversation partly with himself. He asks himself why he has spent so much of his life in pursuit of objects he – for whatever reasons – finds beautiful, starting as a young boy who was given a bag of old coins and added to them with the passion, curiosity and single-mindedness that are still so much a part of him. He asks whether he is normal and we, the readers, listen in as he pursues the question with his characteristic thoroughness. In the course of the book he touches interestingly on questions of aesthetics, ethics, economics, politics. Reading this, I felt as though I was at a dinner party with congenial friends and a particularly interesting and free-flowing range of conversation.

The other part of the book is something of an exciting detective story, or detective stories, as we follow the author in finding out about the objects he has bought, in particular the rare Jug and Saint. Roger would not claim to be an expert, but he has clearly over the years acquired a certain level of knowledge, which he wears lightly. His persistence, some would say obsessiveness, enabled him to follow the chain of clues his research produced and unearth the stories behind the objects, stories which had eluded the experts. In the process we, along with him, learn a lot about history as it connects with the objects.

Whether you share Roger Stewart’s passion or are simply a general reader, I can recommend this book as a very enjoyable read. A word of warning might be appropriate. If by chance you catch the collecting bug, you will need to live alone or have a partner as tolerant as Roger’s wife, Frances, as your house steadily fills up with treasured finds.

I loved this book. It’s funny, informative and highly entertaining. It hooks you in from the start and leaves you wanting to know more. A very impressive first book. Definitely one to curl up in front of the fire with.

A fascinating and very informed account, full of inside information and interesting anecdotes. As an amateur collector myself I marvel at Stewart’s in-depth knowledge of the valuable items he has managed to procure when others were totally unaware of their intrinsic value. The account of how French auction houses (or rather THE auction house, the hôtel Drouot) work. I was enthralled!

I thoroughly enjoyed this book.The author takes you from his beginnings in a pub in Central London to the small North Edinburgh salerooms on a journey which takes him to Burgundy and Paris (via Motherwell) in search of answers (and a small fortune).The book is delightfully written and gives an insight into the author’s thinking when searching for his treasures. He is not afraid to share his vulnerabilities and concerns with the reader, in a very down to earth style, which makes the book more engaging. I was especially taken by the autobiographical glimpses into what must have been a fascinating life.The tales of each of the treasures is hugely interesting and I couldn’t wait to find out what happened to them – and was surprised and delighted when I did find out.I am neither a collector nor interested in history yet I enjoyed this book for its gentle telling of the real life journey the treasures and the author have been on.

This whole book is a treasure! Who doesn’t love the thought of stumbling upon a bargain and knowing it’s a valuable antique – but this book has given me some secrets about how to do it! I also loved the anecdotes about the author’s childhood, wonderfully descriptive and warmly recounted. I got lost in it very easily and have bought extra copies for Christmas gifts!

This book is an absolute treasure. Thoroughly enjoyed it an insight into a fascinating world of buying and selling antiques and treasures. Roger clearly knows his stuff and is a very interesting man. I would highly recommend this book.

A fascinating read combining autobiographical elements with the author’s analysis of why he seems to be able to recognise the “treasures” which others pass by. The stories of how some of these objects are then researched and subsequently sold on are equally interesting.

“Random Treasure absorbed much of Christmas Day and most of Boxing Day – quite unputdownable! I found it to be a marvellous combination of biography, aesthetic sensibility, psychological and philosophical musing, research primer, suspenseful detection and compelling invitation to enter the world of the genuine collector – and all in a dramatic and page-turning narrative! … It’s a hell of a good read!” (S.A.)

“I have just finished your book, and can truthfully say I have never got more enjoyment from a printed text. It was gripping from beginning to end, and absolutely fascinating. Very well produced, it is also very well written and structured [and] it kept you hooked . . . It is also very honest as to your motivations and worries . . . I am now going to lend it to a book dealer/art dealer friend, and I’m sure he’ll enjoy it as much as I have.” (M.S.)

“Would absolutely recommend this book. A beautiful read about beautiful objects.” (A.L.)

“The narrative gripped my attention from the beginning, and developed very satisfyingly in its mixture of practicality and reflectiveness. I was uncertain whether to buy the book, as it is in a field I have little knowledge of . . . but now I am extremely glad that I did.” (P.G.)

“I have nothing but admiration for the quality of the writing and just overall readability.” (A.N.)

“I have just finished reading it. Congratulations – Wow! I found it to be very enjoyable, a page turner, some big words . . . but very readable, interesting, heart-searching, heartfelt, and a very personal honest and true story . . .”         (D.G.)

“I have thoroughly enjoyed reading it. I expected that it would be a fascinating insight into the story of the Saint [and] the Jug . . . but as well as that, it had me on the edge of my seat in auctions . . . [and] I also didn’t expect the laugh-out-loud moments . . .”  (C.S.)

“I have read your book & loved it! It is very good indeed, I laughed a lot! You have a great gift for storytelling.” (B.R.)

“Most enjoyable book. Cleverly written . . . interspersing the excitement of the chase with analysis of the ethical issues and some lovely insights into your background” (C.H.)

“I bought your book recently and have just finished it, and I just wanted to send you a message to tell you how much I really enjoyed it. I’m a dealer, so the St John story was my favourite part, but I liked the autobiographical and psychological stuff too. I’m a keen reader of memoirs by dealers/collectors/auctioneers, and your book is the best contemporary one I’ve read.” (D.M.)

” …having started to read it, I have become quite hooked. Not far into it yet, but it rings so many bells I have ordered five copies, one for myself as well as presents for ‘antique’ friends at Christmas.” (H.J.) 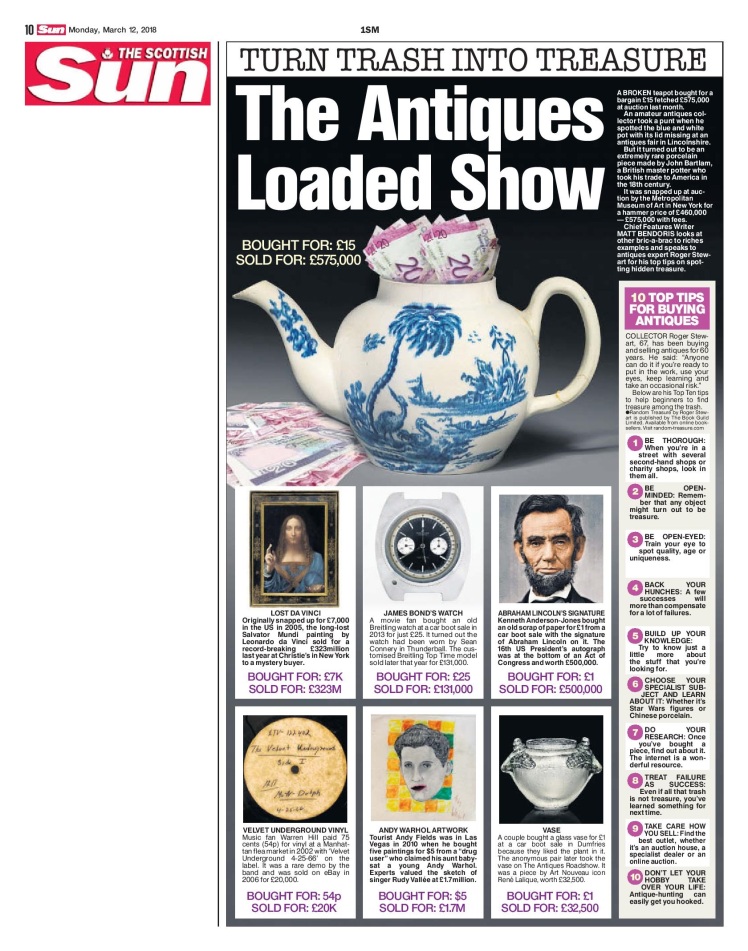